Earlier this year, I released a tiny game titled "Dogs Throwing Swords II: Three Barks to the Wind". It's a silly arcade-y bullet hell where you choose your own custom team of sword-throwing dogs and guide them through a forest to fight bats, fish, and devils. The idea was directly inspired by Mercenary Force, a Game Boy game where you build a team of Japanese warriors and fight mercenaries and demons. I had never made a bullet hell before and honestly I've never been very good at them, either! But, the idea of controlling a team of dogs with unique abilities was really fun to me :)

Dogs Throwing Swords II was originally released as part of The Locally Sourced Spring Bundle, a co-op sale organized by Mike of the Michigan's GamedevMI discord group (Thank you, Mike!). The idea was that a bunch of Michigan game developers would make jam-size games, sell them as a bundle, and split the profits. In the end the bundle sold a few dozen copies and was a really fun cooperative project from our local scene, with thirteen devs joining in. The Michigan indie devs are a really kind & encouraging group, and I can't wait to see what we pull off in the future!

A few weeks later in June, Leaf from itch.io put out a request. He planned to host a bundle to raise money for organizations that combat racial injustice as the Black Lives Matters movement grew across the globe, a reponse to atrocities committed by U.S. police officers. I added Dogs Throwing Swords as my own very minor way to contribute (it would be joined by a ridiculous number of incredible full-fledged indie hits like Celeste, Night in the Woods, Anodyne, and Nuclear Throne). The bundle absolutely spiralled in popularity over the next couple of weeks. It was wild seeing just how many devs ended up adding their work. By the end, it contained 1,741 items: games, asset packs, tabletop RPGs, and more! Players bought over 814,000 copies, raising over 8 million dollars for legal defense, education, and community bail funds. I can only hope my promo pic of some cute pixelly pups helped to sell a couple more copies. I would LOVE to see itch.io organize more charity bundles in the future!

Dogs Throwing Swords II took a total of 70 hours to make, and I'm so happy with how it came out given that limitation. It's about 20 minutes long and contains 6 levels, a dozen traps & enemies, and obviously, a big boss fight or two! It has some problems - a lack of polish, some bugs - but for a jam game, I think it feels really good to play and is just unique enough to be memorable! I had a bunch of ideas to expand it... unlockable dogs, various routes & secrets (ala Star Fox 64), and more bosses. But I insist on finishing Bossgame before I switch gears again, and... who knows what I'll want to make after that? Too many ideas and never ever enough time. However, I do have a newfound appreciation for bullet hells... I'm very excited to check out Bullet Sorceress because it looks just wickedly gorgeous.

Dogs Throwing Swords II was a really fun project that I made alongside cool friends, and ended up being a tiny piece of something very awesome. Go take a nap, little buddies, you did such a good job, yes you did!! ♥

You can find Dogs Throwing Swords II: Three Barks to the Wind on itch.io. If you bought the Bundle for Racial Justice and Equality, you already own it! 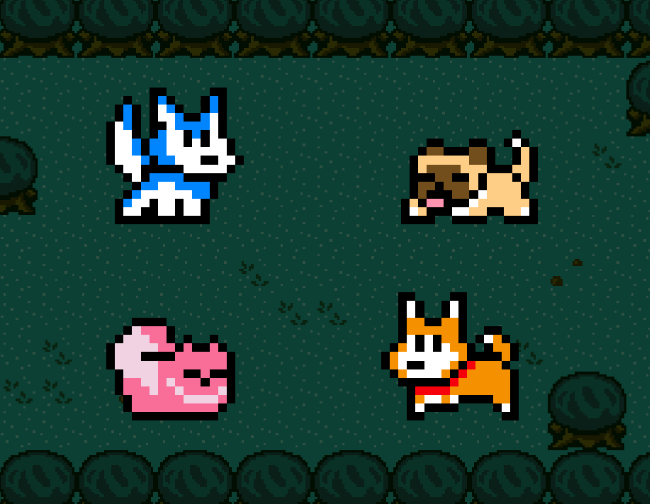